The team has been able to study the flow of healthy RBCs in confining capillaries [Claveria et al, 2016] and show how depletion forces present in the suspending plasma can induce cells clustering in flow where they were not expected because of the effective shear stresses in these small vessels.

In parallel for bulk flows, it was known that blood viscosity decreases with shear stress, a property essential for an efficient perfusion of the vascular tree. This shear-thinning is intimately related to RBCs dynamics and mutual interactions. We have been able to explore the complete behavior of an RBC under shear flow [Dupire et al, 2015, Mauer et al, 2018, Mendez and Abkarian, 2018] and to propose a new paradigm of hemorheology associated with the new dynamics that we observed and modeled [Lanotte et al, 2016] (see panel). This discovery allowed us to obtain the flagship project of the labex Numev in 2017 to build a dedicated hemo-/bio-rheology plateform to re-explore blood rheology. 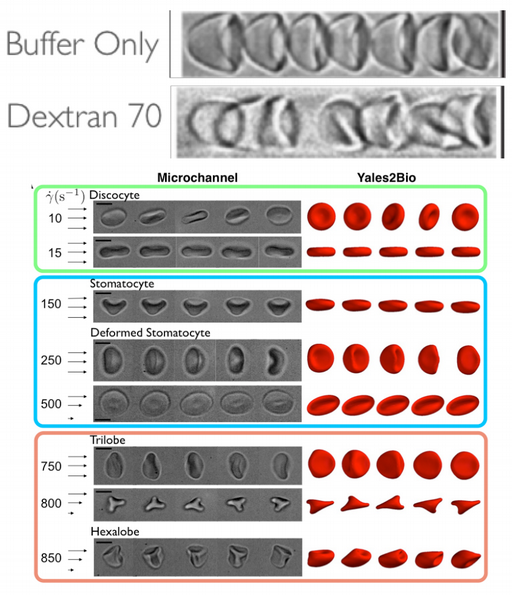 Additionally, to physiological situations of flow, our group started the study on physical aspects of Sickled Cell Anemia (SCA) and Malaria which are two diseases of the microcirculation. Both diseases are linked to drastic modifications of the microcirculation sometimes to the point of a vaso-occlusive event, which can be lethal for the patient when this happens in an organ like the brain. While the two diseases are of different origin, one due to a genetic point mutation of the hemoglobin and the other due to an obligate intracellular parasite, they are biologically linked. For the moment, we are studying these two diseases separately in order to better understand the different aspects of their patho-physico-biology. In the future, we plan to investigate other  microcirculatory conditions such as Diabetes, which is a metabolic disease and affects the mechanics of RBCs membrane and therefore their flow.

Sickle cell anemia for instance is characterized by painful vaso-occlusive crises (VOC) in deep tissues. Using microfluidic devices, we showed that the flow of a suspension of sickle RBCs around acute corners or bifurcations, leads to the enhanced deposition and aggregation of cells [Loiseau et al., 2015] (see panel). We found that aggregates morphology changes dramatically to filamentous structures when using autologous plasma as a suspending fluid. Such structures could play a major role in VOC. Moreover, we recently explored the role of cells mechanical heterogeneity naturally present in patients on the possible the self-margination of the cells. 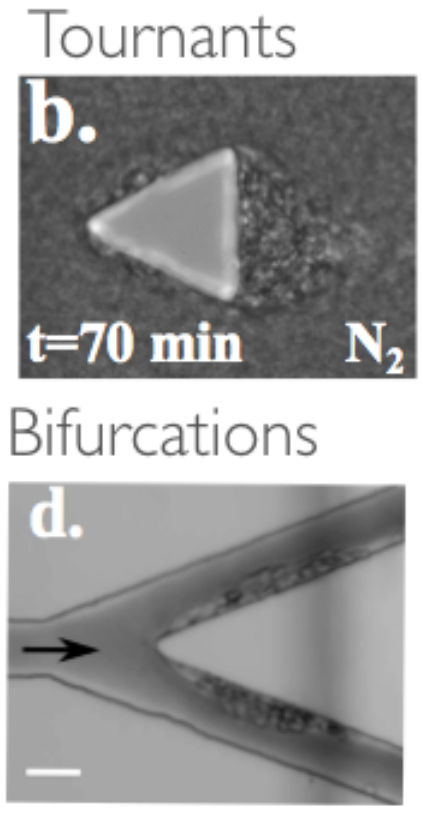 For malaria, most clinical symptoms result from the intra-erythrocytic development of the parasite starting with the active penetration of a merozoite into an RBC and the concomitant formation of a specific compartment called the parasitophorous vacuole (PV), in which the parasite will grow and multiply; around 48 hours later, the egress process releases up to 32 new infectious merozoites in the blood circulation as well as pyrogenic toxins causing cyclical fevers, the hallmark of malaria. In collaboration with the team of Catherine Braun Breton at the DIMNP in Montpellier, we have identified in the past new steps in this egress process and especially how the membrane acquires a spontaneous curvature leading to membrane curling and efficient parasite release [Abkarian et al, Blood 2009] and recently we looked with colleagues from Heraklion university in Crete at the rupture and vesiculation during Plasmodium berghei gametocyte egress from RBCs [Andreadaki et al, 2018]. Concomitant to release, we have highlighted the existence of a new motility of rapid rotations of the released plasmodium merozoites when they enter into contact a RBC and on solid substrates (see right panel). We linked such rapid movement to the presence of actin rails in the parasite [Casanova et al. in preparation], but further studies are necessary to understand how such movement is possible and its force-displacement characteristics.