Nuclear Receptors as Integrators of Endogenous and Environmental Signals

Theme 4: Structure and function of the aryl hydrocarbon receptor (ATIP-Avenir)

Each day our body comes into close contact with myriads of various chemical substances also known as xenobiotics. Since some of them can trigger long-lasting effects that can potentially be quite harmful, the impact they have on our organism should not be overlooked. Understanding the processes governing recognition, metabolism and removal of foreign substances is critical to fully comprehend their toxicity. Aryl hydrocarbon receptor (AHR) is one of the crucial chemosensory proteins involved in the metabolism of many pollutants. AHR binds a selection of xenobiotics and regulates expression of numerous genes involved in their detoxification. So far, we are lacking the in-depth structural and biochemical analyses of this essential signalling pathway. Most importantly, no high-resolution structure has been reported for the region encompassing ligand-binding domain of AHR. Therefore, the details of the ligand-dependent regulation of the protein remain obscure and our grasp of the underlying mechanism is very limited. 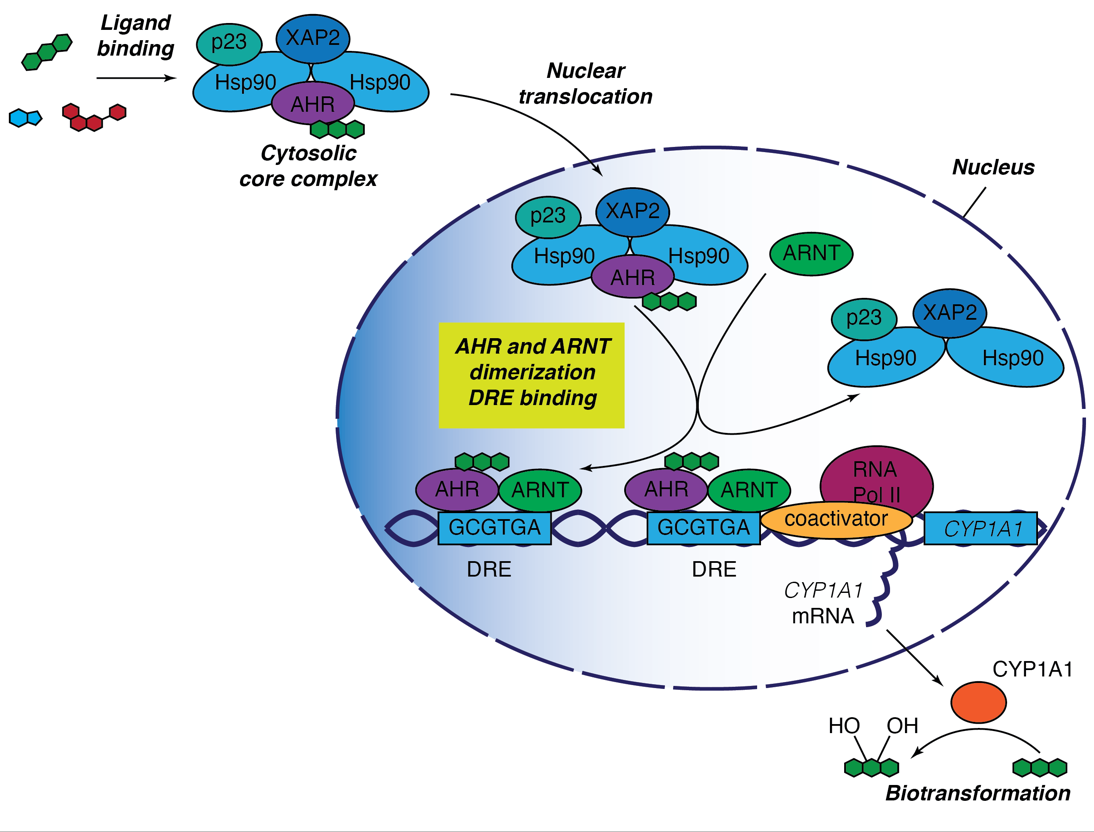 The canonical AHR activation pathway. The unliganded AHR resides in the cytoplasm in the form of the multiprotein complex including Hsp90, XAP2 and p23. Upon ligand binding, AHR undergoes translocation into cell nucleus where the chaperone complex is displaced by AHR-nuclear translocator protein (ARNT). The AHR-ARNT heterodimer recognises a dioxin-responsive element (DRE) with the consensus DNA sequence 5'T/G/TCGTGA/CG/TA/T-3' localised in the promoter region of many genes. AHR and ARNT can recruit different coactivator proteins, thus enabling efficient gene transcription. The best studied target gene of AHR is cytochrome P450 1A1 (CYP1A1). CYP1A1 is an aryl hydrocarbon hydroxylase involved in biotransformation and metabolism of multiple chemical pollutants. RNA Pol II - RNA polymerase II.

Our project aims to structurally and biochemically characterise particular steps of the AHR-dependent signalling pathway. We would like to focus our attention not only on understanding how a single receptor is capable of binding many various chemical compounds but also on the exact role of its different protein partners. We hope that by methodically dissecting particular steps of this signalling pathway we will be able to provide a detailed molecular mechanism underlying the processes of detection and detoxification of chemical pollutants in our body and, as a result, to shed more light on the essential aspect of human physiology..