Huntington's Disease (HD) is a hereditary neurodegenerative disorder that is characterized by involuntary movements, general motor impairment, psychiatric disorders and dementia. The molecular basis of HD has been the subject of studies since the early 1990s, when the causal gene and its tri-nucleotide expansion were discovered. In the resulting gene transcript, the huntingtin protein (htt), the mutation leads to poly glutamine (poly Q) expansions at the N-terminus, and poly Q tracts with more than 35 repetitions are pathogenic.

Even though htt has been the focus of many studies, its high-resolution characterization has been impaired because htt is aggregation prone. Furthermore, the N-terminal part harboring the mutation does not adopt a globular structure, prohibiting X-ray crystallization studies and the poly Q repetition is poorly resolved in NMR spectra, precluding data analysis.

To overcome the current limitations of poly Q analysis, we combined nonsense suppression and cell-free expression to site-specifically label a single glutamine in htt. We then performed NMR experiments to obtain well-resolved spectra that allowed us to precisely measure backbone and side-chain chemical shifts and enabled the derivation of htt secondary structure elements. Our analysis of htt indicates that the 17 N-terminal residues have a strong propensity for α-helical structure that increases when approaching the poly Q tract. This propensity then decreases along the poly Q tract and the following residues, including two poly P tracts, show a greater tendency towards extended structure, which is most likely due to the enrichment in poly-proline-II conformations.

With this methodology we can now obtain other NMR observables such as residual dipolar couplings, relaxation rates and paramagnetic relaxation enhancements that can be used to decipher local conformational propensities, structural cooperativity and intra-molecular interactions in poly Q regions. This paves the way to understand the structural bases of the pathological htt species and the putative presence of a subpopulation of toxic conformers that remained speculative up to this point. 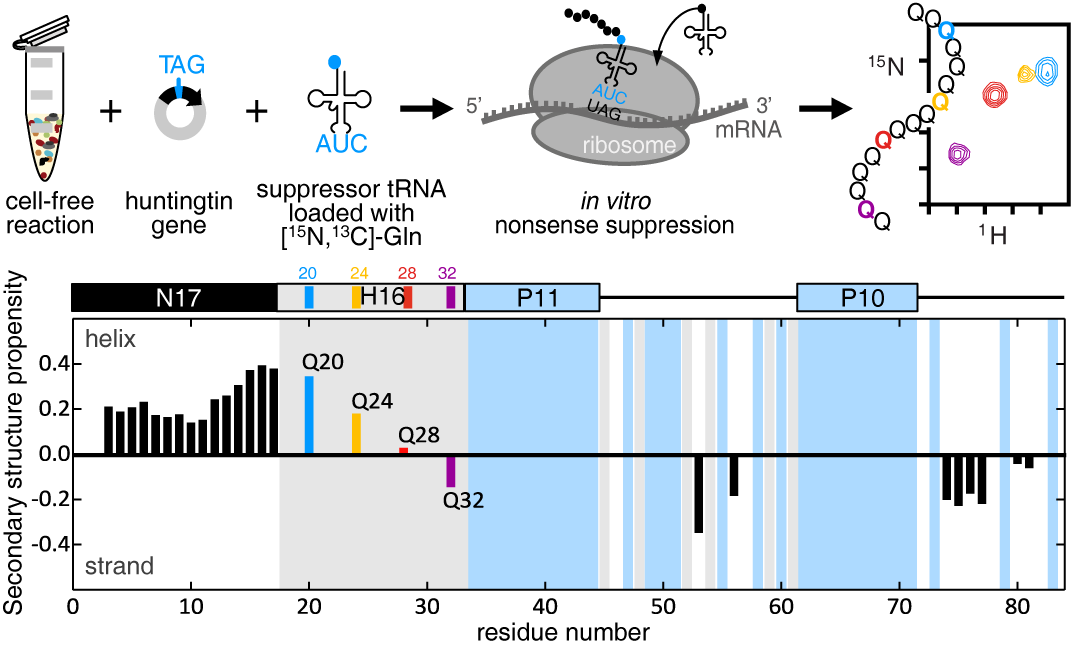